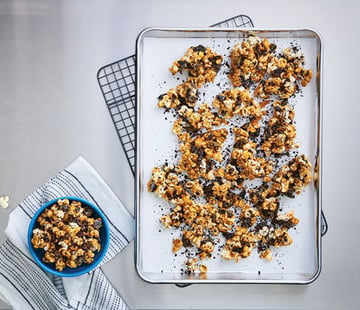 More than half—54%—of consumers who’d stopped going to movie theaters at the start of the pandemic or when the delta variant emerged say being able to get gourmet foods at a higher price would make them want to attend movies more often.1

After spending much of 2020 and points of 2021 isolating at home, venturing out to a cinema or other venue can be cause to celebrate—a scenario that’s played out at a number of Marcus Theatres’ 85 U.S. locations, according to Rob Novak, Marcus Theatres’ vice president of concessions and food and beverage.

“People have spent more,” Novak says. “What we’ve seen is when people go out, they want to indulge.”

That can be good news for theaters, since concessions are often a highly profitable business model component, according to Malcolm McAlpine, business manager for branded snacks and confections at Mondelēz International Foodservice.

“Food and beverages are a massive margin contributor,” McAlpine says. “The trend is to broaden the scope of concessions and what they’re offering.”

Here’s a look at what some theaters have been including on their movie menus.

In addition to the traditional popcorn, soda and candy, a number of movie theaters have begun serving more unconventional fare in recent years—ranging from vegan chicken nuggets, which AMC debuted earlier this year2, to upscale macaroni and cheese made with RITZ crackers, which is available at Bow Tie Cinemas, a chain with locations in six states.3

When renovating its theaters around 2009, Marcus Theatres began to add kitchens, according to Novak; today, the theaters’ dining options include unique items such as fried pickles, chicken and waffles, and cheese curds.

“The theater industry a lot of times follows the stadium business, [which] 10 years prior was getting into chefs and bringing in upscale things,” he says. “It wasn’t just beer and peanuts anymore. As consumers on an out-of-home basis looked for more offerings, we had to do it, too.”

Marcus Theatres generally tries to keep its menu on trend, according to Novak, but also considers convenience.

“Initially, we tried to mimic what you see in different dining concepts,” he says. “But as we learned, people want items they could eat with their hands. It’s not a very knife-and-fork-friendly environment, both from the sound of cutting and just the difficulty of twirling pasta in the dark and making it from that bowl to your mouth.”

Name brand products, sold on their own or included as ingredients in menu items, can also pique consumer interest, according to McAlpine.

“There’s a ready acceptance of branded ingredients—particularly where you have an established brand like OREO that appears in desserts, pie crusts and shakes, ice cream,” he says. “You don’t see no-name gummies or chocolate items in concessions; it’s all the big brands because that’s what people want and expect when they go to the movies.”

“Movie theaters have been resistant to add a lot of hard-packed, scoopable ice cream; they prefer it to be novelties, which are in the freezer case, ready to go,” Novak says. “But if customers are willing to pay and we can make it work from a labor perspective, we can accommodate it.”

Gourmet popcorn is another growing trend, McAlpine says, which can be sold at a premium. A Cheetos variety was available from Regal Cinemas in 2017; and OREO popcorn is currently being served at select theaters nationwide.

“You’re starting to see more higher-end popcorn,” McAlpine says. “The movie theaters see that as a natural extension of one of the most profitable items—a way they can extend their popcorn offering and charge accordingly.”

Movie theaters can also potentially increase concessions sales in other ways, such as offering combo deals, which may encourage moviegoers to purchase more items.

“There’s a lot of bundling—buy a popcorn and SOUR PATCH KIDS and get a dollar off,” McAlpine says. “We’re going to continue to see that more and more.”

Alcoholic beverages, too, can be a high-margin addition. McAlpine has seen theaters replace lower-performing video game areas with bars, seated food sections and other amenities that can prolong guests’ experience by allowing them to come early—and potentially start spending before showtime.

“Instead of them stopping at Panera before or after, what if [the theater] could capture that sale?” McAlpine says. “A lot of them have bars; now you can get a meal while you’re watching a movie.”

Adding cocktails in 2007 was a game changer for Marcus Theatres, according to Novak; currently, about 90% of its theaters have bar service.

“It increased spend—getting consumers to the theater who might not have gone and were looking for something different in their entertainment experience and engaging consumers who were moviegoers but not necessarily concession buyers,” he says. “And they have very low waste levels. They don’t spoil as quickly; it’s not like when you’re dealing with fresh foods.”

Offering a mix of cocktails, burgers, ice cream and other items helps theaters satisfy a variety of consumer tastes—which, Novak says, can be key in the current entertainment environment, where theaters are constantly competing with home entertainment streaming options.

“We’ve spent a lot of time in the last decade reinvesting in theaters to do everything we can to up the out-of-home experience—including the food and beverage,” he says. “We’re trying to bring the things people want together; the best chairs, the best sound systems and the offerings that, in your mind, need to accompany those things. Whether you want alcoholic beverages, soft drinks, a burger, chicken tenders—that’s what we’re trying to do.”

Reach out below to learn the many ways Mondelēz International can help your operation create crave-worthy concessions.

1 Exhibition At A Crossroads, The Quorum, Cultique and Fanthropology, November 2021